It’s no secret the holiday season was frustrating for Amazon. FedEx, USPS and UPS struggled to keep up with the volume of final week before Christmas deliveries as millions of new Amazon Prime members ordered gifts and expected free, 48-hour delivery. We look at Amazon’s ambitious plans for leadership in logistics from trucking, warehousing and local same-day delivery to air cargo, shipping by container from Asia and drone deliveries in the future.

By buying thousands of semitrailers, Amazon is building its own ground transportation system reports Steve Osburn, retail strategist at consulting firm Kurt Salmon. Amazon runs 76 distribution centers in North America, plus 18 sortation centers, according to supply chain consulting firm MWPVL International. Paymnts.com reports that Amazon is unhappy with costs and delivery challenges by its primary partner UPS. Could this mean a logistics divorce in the future? In the Boston area, EcommerceBytes says Amazon is testing direct-to-customer deliveries and considering expansion in the Northeast US.

Amazon China new ocean cargo services will make it easier for China manufacturers to ship products by container to the US, a potential $350 billion global market. As part of its $2 billion investment, Amazon India now operates in 21 cities and 19,000 postal areas in India with 21 warehouses. The company will be expanding its Amazon Prime Pantry next-day grocery delivery service in India as well. During the holiday season in the UK, Amazon tested and ran contests to promote package pickup lockers. Finally, in 2016 we expect to see the real possibility of package delivery by drones in one or more key markets such as the UK or Europe. George Jetson, where are you? Amazon doesn’t appear to be slowing down in its mission to change the face of retail. The Seattle-based e-commerce giant continues to make strides in its delivery and shipping innovations, with several recent developments including the purchase of thousands of semitrailers and Prime Now expansions.

Industry analysts say these moves are indicative of Amazon’s desire to eventually own the whole delivery process. While that would undoubtedly impact traditional shippers and retailers, there’s still room for them to grow in the thriving e-commerce market, according to Steve Osburn, a retail strategist at consulting firm Kurt Salmon. Via retaildive.com

Amazon.com Inc. is taking its show on the road. Literally. The online retail giant, No. 1 in the Internet Retailer 2015 Top 500 Guide, bought a fleet of branded semitrailers aimed at making the order fulfillment process more efficient. Those trailers will have Amazon Prime branding on them and essentially will serve as traveling highway billboards in addition to moving merchandise from Amazon distribution centers to facilities where Amazon workers sort parcels before turning them over to the U.S. Postal Service for delivery to consumers. Amazon operates 76 distribution centers in North America, plus 18 sortation centers, according to supply chain consulting firm MWPVL International.

The trailers will not make deliveries to customers and Amazon will not own the trucks that haul the trailers from place to place. Via internetretailer.com All Amazon probably wants for Christmas is lower shipping costs. The logistics industry, however, hasn’t quite delivered what Amazon’s been wishing for, which may cause a strain between the eCommerce giant and its once shipping giant ally. While UPS has built its systems over the years to keep up with the rising demands that came as Amazon’s popularity increased, that hasn’t necessarily kept their relationship positive.

In a Wall Street Journal piece that cites interviews with current and former UPS and Amazon executives, the changing nature of that relationship as those costs continue to rise is explained. Those costs, in fact, have already led Amazon to create its own logistics side, which could eventually make it one of UPS’ biggest competitors. 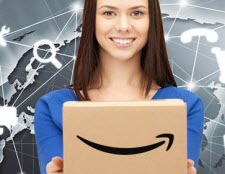 Amazon is doing something that should have shipping carriers nervous: it’s delivering its own packages in the metropolitan Boston area. Over the past 2 weeks, we’ve received Amazon Prime 2-day packages from drivers in unmarked white vans. The drivers work out of a Dedham, Massachusetts location and are employed by an Amazon contractor (Staff Management / SMX).

From what we were able to piece together, Amazon has at least 2 locations for these new types of in-house deliveries in Eastern Massachusetts, including the Dedham location. Drivers told us Amazon has plans to build more centers to serve New Hampshire and Western Massachusetts. Via ecommercebytes.com

Amazon Builds Out Its Own Delivery Network

Amazon announced on Tuesday it will open its first Massachusetts fulfillment center. The company already has a Sortation Center in Stoughton and a Prime Now delivery hub in Everett, and it has research and technology offices throughout the state.

EcommerceBytes broke the news yesterday that Amazon has a direct-to-consumer delivery hub in Dedham, Massachusetts that the company has yet to publicly disclose. The Dedham hub is part of Amazon’s efforts to build its own in-house delivery network as described by the Wall Street Journal last year. Marc Wulfraat, president of MWPVL International, a supply chain and logistics company, is an expert in Amazon’s logistics network. He told EcommerceBytes that Amazon has been testing “direct-to-customer” shipping in Seattle, Los Angeles, San Diego, and San Francisco. Via ecommercebytes.com

Amazon China Can Now Manage Ocean Shipments for Other Companies

Cargo ships might not be as intriguing as drones, but they represent a potentially lucrative new business opportunity for Amazon. The e-commerce behemoth’s China subsidiary can now provide ocean freight services to other companies.

Flexport, a freight forwarding startup, first broke the news that Amazon China is now listed on the Federal Maritime Commission’s site as a licensed ocean transportation intermediary in a blog post written by its chief executive officer Ryan Petersen. This means that Amazon China can reserve cargo space on vessels and sell it to other companies, but it can’t operate its own ships.

Petersen notes that this will allow Amazon to enter the ocean freight market, which he says is worth $350 billion, and removes a major pain point for Fulfillment by Amazon, its logistics service, by making it easier for Chinese merchants on its platform to sends goods to the United States. TechCrunch has contacted Amazon for comment. Via techcrunch.com

One of the key areas of investment for Amazon India is supply chain and logistics. Amazon, which delivers to more than 19,000 postal areas in India, also added eight warehouses this year, increasing its count to 21. It has the most warehouses and storage space among e-commerce firms in India, ahead of Flipkart, which has 17.

Because of its fast supply chain expansion, more than 90% of Amazon’s 52,000 third-party sellers use its logistics service, Fulfilment by Amazon. With this service, which is a mix of Amazon’s logistics network and that of external logistics firms, the company is able to ensure fast and reliable delivery of products. “In 2015, (fast and reliable delivery) has come out as a key thing that separates Amazon from others,” Amazon India country head Amit Agarwal said in an interview. Via DealStreetAsia

The significant increase in Prime members to ‘tens of millions’ over the recent festive period has reiterated the fact that consumer spending habits are quickly changing. Amazon’s ecommerce offering and greater grocery delivery services are likely to pose a threat to the UK’s Big Four supermarkets. Amazon Pantry customers are currently able to choose from 4,000 branded food and beverage items, pet and baby supplies and hair and beauty products. Brands include Heinz, Pantene and Nescafe. Groceries are ordered through a box system priced at £2.99 for next day delivery. Via retailgazette.co.uk

Amazon is bringing awareness of its delivery lockers to the masses by running a contest in the run-up to Christmas. We’ve been writing about the package pickup trend since it started picking up steam in 2011 – that’s where retailers allow shoppers to pick up online orders at corner stores and other handy locations, and it’s proving to have staying power thanks to the convenience and security it offers customers.

Amazon kicked off the Santa’s Locker contest in the UK on December 11 and it runs through Christmas Eve. Each day, Amazon puts between two and five gifts inside different lockers, and then provides clues to help participants find the lockers and codes so they can open them to win the gifts. Amazon is posting daily updates on its UK Facebook page and UK Twitter account and is providing the clues and codes for Santa’s Lockers on Amazon.co.uk/santaslocker. Via ecommercebytes.com

Amazon delivered a lovely update on its ‘Prime Air’ project today — almost exactly two years after it showed the first iteration of its drone. You know, the flying delivery drone that some thought was a massive joke meant for April 1st. Included are some high-res shots and two new videos.

The video, moderated by ex-Top Gear host Jeremy Clarkson (who is now working on a new series for Amazon), talks about the design and your experience as a recipient. Via techcrunch.com

Amazon vice president spills the beans on why Prime Air will be the future of delivery
Amazon has revealed a range of further details on how it plans to deploy its next-generation delivery drones.

In an interview with Yahoo Tech, Amazon vice president Paul Misener offered up an explanation of how the company’s Prime Air delivery service will work and how Amazon is overcoming some of the problems it has encountered. Amazon is hoping to get its drones into public use within the next few years following the completion of a thorough testing period, which will see how the drones cope with a range of deliver challenges. Via techweekeurope.co.uk

Amazon Everywhere may be a theme for 2016

One thing is certain about Amazon’s logistics strategies. They’re designed to enhance customer service, grow prime memberships, increased business and ultimately enhance profitability. Imagine if you’re a large e-commerce, retailer or other merchant and you must now face offering free, same-day or 48-hour delivery service, be competitive on price and provide additional value added services to compete? With its size, Amazon is committed to the long-term and its competitors must adapt and be nimble in response in the immediate future.