Some US retailers and online sellers have already launched Black Friday deals, others are finalizing their offers and consumers are getting excited. We’ve got the latest retail and e-commerce Black Friday sales news and updates for you.

Amazon’s US deals launched Wednesday featuring  a long list of planned discounts and will end just prior to Christmas in the US. Millennials will be mobile shopping this year according and Adobe predicts online sales should reach $92 billion. A CNN news video highlighted several interesting facts: each Amazon fulfillment center holds 15 million items; orders  travel eight miles of conveyor belts; packages get less than one minute of human contact.

Macy’s tops a WalletHub report on the 35 best stores for the highest Black Friday discounts with an average of 63.4% followed by Stage (62.8%) and JCPenney (62.8%). Amazon came in at 24.7%, number 34 on the list. JCPenney mobile app users will get a special preview of Black Friday deals. Toys R Us is using mobile in the store features and free in-store pickup to make shopping easier for consumers. Walmart’s mobile app will give consumers a preview of Black Friday specials and stores will open at 6 PM Thanksgiving day.

Home Depot’s ads were leaked and showed deep discounts on appliances running through November 30. Best Buy dropped its preview 48-page Black Friday, consumer electronics catalog loaded with discounts. While Black Friday is here to stay, shopping malls and major retailers are tweaking things by closing on Thanksgiving day, enhancing online buying and other strategies. Forbes featured a long and growing list of major US retailers closed on Thanksgiving Day though most will have website sales operating around-the-clock. REI is promoting its second annual #OutOutside campaign, by partnering with Skedaddle to offer free rides to outdoor locations.

Finally, if you’re looking to browse the entire collection of US retail Black Friday ads, BlackFriday.com has them all in one spot. Consumers are excited, retailers are ready, websites are geared up and mobile phones will be mobilized as shoppers start searching for the best Black Friday deals online and in-store.

Starting Wednesday, the e-commerce giant is offering deals on a variety of products, including toys, electronics, kitchen and home goods and video games.
However, the company said many of its top deals will be offered during the “Turkey 5,” which starts on Thanksgiving Day and runs through the Monday following the holiday — known as Cyber Monday.

Amazon claims it will have the lowest prices on certain Samsung, LG and Sony TVs and is reducing some prices of Barbie, Hot Wheels and Fisher-Price toys by as much as 50%. Via money.cnn.com

More reaching for their phones to shop on Black Friday

Millennials, who hold a major buying power this holiday season, are opting to reach for their phones rather than wait in line for Black Friday deals this year.

The vastly different consumer habits of the younger generation are changing the way retailers hire workers, advertise products and deals, and prepare for the upcoming holiday shopping season.

Holiday sales are expected to reach more than $655 billion, and a study from Adobe showed online sales could hit about $92 billion. Via springfieldnewssun.com

JCPenney is promoting its Joy Worth Giving campaign that will span all the holiday season by offering an exclusive peek at Black Friday deals to users of its mobile application.

The move was intended as a perk for loyal customers who use the brand’s loyalty app, giving them a head start on the crowds that will inevitably form on the morning of Black Friday. Black Friday marks the beginning of the holiday season for JCPenney.

“Our app users were able to exclusively view our Black Friday deals before anyone else — this was a new holiday perk we added to our app this year,” said a JCPenney spokesperson. Via mobilecommercedaily.com

Black Friday shopping is often filled with chaos, but instead of store-hopping to find the best deal, a new report has dubbed the best places to shop for savings.

The report from personal-finance website WalletHub surveyed 8,000 Black Friday store deals from 35 of the biggest U.S. retailers. WalletHub then identified the stores offering the biggest discounts in various categories, including appliances, jewelery and toys.

Macy’s topped the list with the highest overall discount rate at 63.35 percent.
Other department store giants, such as Kohl’s and Sears, took sixth and tenth place, respectively. Wallethub also warned against Black-Friday “traps” — customers should aim for a 39 percent discount or higher when shopping Black Friday deals. Via nbcchicago.com

Toys “R” Us prepares for holidays with in-store mapping

Toys “R” Us is gearing up for a hectic holiday by enabling a few mobile-focused in-store features, including free in-store pickup and a mobile Web map to help consumers navigate the store.

As the Black Friday approaches, signaling the beginning of the holiday shopping season, the toy store is making use of in-store mobile mapping services to help keep foot traffic flowing. The feature will also help consumers find the things they are looking for quickly and easily.

“Our customers have voted at the doors year after year, and they continue to want the option to get an early start on their holiday shopping lists,” said Joe Venezia, executive vice president of global store operations at Toys”R”Us, Inc. “The good news is that we’re not only focused on delivering a Thanksgiving Weekend filled with deals and doorbusters, but we’ll be giving shoppers an entire month of can’t miss sales and services.” Via mobilecommercedaily.com

The retailer will kick off its in-store Black Friday sales on Thanksgiving at 6 p.m. (The chain has opened on Thanksgiving for more than 30 years, and the bulk of its stores are typically open 24 hours.) Wristbands for certain doorbusters will once again be given out in an attempt to reduce frenzy, as will store maps. Unlike last year, however, sales will not be staggered in one-hour windows. Consumers who obtain a wristband will have two hours after the start of the sale to purchase the doorbuster.

Online holiday promos, meanwhile, will be available for purchase at 12:01 a.m. on Thanksgiving. Consumers will need to download the Walmart app to get a peek at the sales, details of which went live today. Via twice.com

The Home Depot’s 32-page Black Friday circular was leaked by BFads.net, and it revealed a 6 a.m. store opening on the big shopping day.

As per tradition, the No. 1 home-improvement chain will close all locations for Thanksgiving, although its website will be alive and kicking with Black Friday specials all day Thursday, beginning at 6 a.m. EST, with new deals added daily, the secreted circular showed.

Month-long “special buys” pricing on major appliances and other categories kicked off Nov. 2, with Black November deals featuring up to 40 percent off refrigerators and up to 35 percent off laundry pairs, ranges and dishwashers. The discounts will be offered through Nov. 30, along with 12- and 24-month zero-percent financing for purchases of at least $299 and $1,999, respectively. Via twice.com

After teasing shoppers with 16 of its Black Friday doorbusters last week, the No. 1 CE chain has let the cat out of the bag with a 48-page Black Friday preview circular.

Store doors will open at 5 p.m. on Thanksgiving Day, with promotional pricing valid through the following Saturday. Showrooms will remain open until 1 a.m. Thanksgiving night, and will re-open at 8 a.m. on Black Friday morning.

Most sale items in the Samsung-heavy insert will also be available online throughout Thanksgiving Day, and Best Buy is offering free shipping with no minimum order requirement throughout the holiday season. Via twice.com

Thanksgiving Day shopping is here to stay – with some tweaks 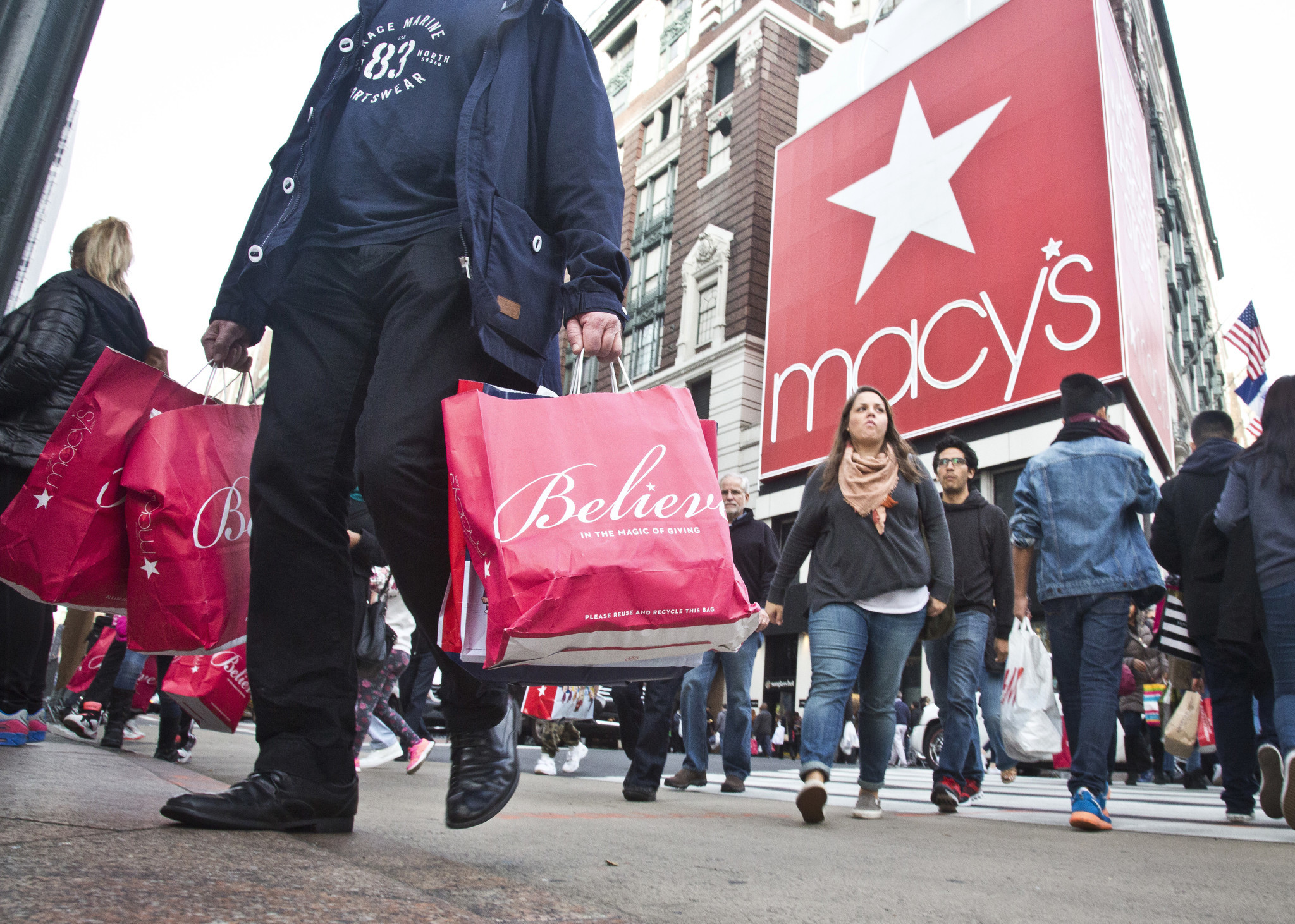 Thanksgiving Day shopping — a delight to some, an anathema to others — isn’t going away, but some stores are rethinking their strategies on whether it makes sense to be open on the holiday itself.

Many of the nation’s major mall operators and the big retailers that anchor them, such as Toys R Us, J.C. Penney, and Macy’s, are sticking with what they want to be a new tradition, kicking off the holiday shopping season on Thanksgiving Day.

Others, including the Mall of America, the nation’s largest shopping mall, are closing for Thanksgiving this year after being open for the past several years. Some retailers that are closing cite respect for the holiday, but in truth the cost of being open may be more than the return. Via chicagotribune.com

The shopping furor that in past years has spread to Thanksgiving Day seems to be yielding to a more concentrated Black Friday blast this year. Below is a long list of distinguished retailers that will not open their stores on Thursday. I applaud these managements for respecting the sanctity of this family holiday. Thanksgiving is a day when many families reunite, to enjoy a family meal featuring turkey and all the trimmings.

Closing stores on Thanksgiving (and Easter Sunday) is an American tradition that many shopkeepers honor. I respect the retailers that show regard for their customers and their associates this way. As people at T.J.Maxx have said, if the store is closed, employees can spend the holiday with their family. However, as a counterpoint, many of the retailers with closed stores will have their Internet sites brimming with Black Friday bargains allowing customers to shop online to their heart’s content.

Here is a list of 52 retailers whose stores will be closed… Via forbes.com

As part of REI’s second annual #OutOutside campaign, the retailer has partnered with Skedaddle to offer rides completely free of charge from REI locations in Boston, Seattle, San Francisco, Washington D.C., and Denver to gorgeous and peaceful locales guaranteed to be free from the frantic and chaotic shoppers on Black Friday. It’s worth noting that, while trips will begin at REI locations, the company has given its employees the day off to enjoy the outdoors as well, so stores will be closed.

“This eliminates a barrier for people to get outdoors,” said Rob Discher, REI’s director of communications. “For people living in a downtown area who don’t have cars, getting out to a national park is hard. This whole program is to help unlock the outdoors for more people, hopefully creating a new tradition on what people can do on Black Friday.” Via digitaltrends.com

Black Friday ad break times
Interested in knowing when Black Friday ad breaks typically occur? Here you go. As you have probably noticed Black Friday ads are being released earlier and earlier each year. This is great for us because we start getting excited about Black Friday already in summer! So what do these earlier ad break dates mean? Well, we’re predicting that the whole season will start on earlier schedules all around. We won’t be surprised if more and more stores start featuring their Black Friday sales at the beginning of Black Friday week. Kohl’s has adopted this strategy over the last two years to great success, so we expect other top retailers to do the same.

Black Friday ads moving online
Like most things in the publishing world, online Black Friday content is becoming more and more relevant. For years we have spearheaded bringing Black Friday sales online and we’re now really starting to see a shift towards online sales. Last year, both Walmart and Best Buy released their Black Friday ads on their website several weeks ahead of Black Friday. We definitely expect more stores to follow suit, so stay tuned to see which Black Friday stores follow this latest online trend. Via blackfriday.com

We’ll have frequent Black Friday retail and e-commerce updates during the weeks ahead. Check back with us often or even easier, subscribe at the top of the page for handy Monday-Wednesday-Friday morning email updates.