The first quarter of 2016 is behind us. Today, we take a look at how UK retail and e-commerce have performed and where the trends may take the industry to the end of the year. The British Retail Consortium reported March sales were down 0.7% due partly to poor weather and Easter closings. There were a few surprises, including JD Sports which posted a 45% jump in annual profits after a surge in demand for women’s sports clothing. Mothercare baby goods chain saw its non-UK store sales drop, especially in the Middle East and China. Anatwine hopes it’s procurement and fulfillment technology we’ll catch on with its US expansion.

Amazon will open a new fulfillment center in Manchester, creating more than 1000 new jobs. Retail challenges in the UK will continue as more than 11% of shoppers never go into brick-and-mortar stores and more than 24% have never shopped online. The soft sales environment hasn’t stopped BoohooMan from launching a new e-commerce store. New Marks & Spencer CEO Steve Rose has pledged to leverage strong food and e-commerce sales (up 8.2%) into restoring fashion sales at the retail icon. Though it has 10% of the US retail market, Forever 21 is closing its Flagship Scottish store and one in Manchester, cutting 200 jobs.

Figures from the British Retail Consortium (BRC) revealed a 0.7% decrease in like-for-like sales in March, compared to a year earlier. However, the analytics agency clarified saying that figures this year had been distorted by this year’s Easter break, which took place in March, though underlying retail growth remained poor.

“This slowdown can’t be viewed in isolation; retail is an industry undergoing significant structural change as the investment in the digital offer continues apace while, from a consumer perspective, more disposable income is being spend on leisure and entertainment,” said BRC Chief Executive Helen Dickinson. Via retailgazette.co.uk 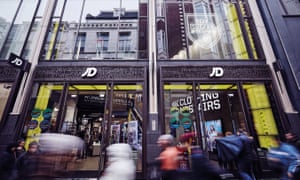 JD Sports has revealed a 45% jump in annual profits after a surge in demand for women’s sports clothing.

Sales at the group’s sports fashion stores, which include JD Sports, Size? and Scotts, rose by 11.6% in the year to 30 January as the company said it had also benefited from being the “dominant” retailer for top brands’ new product launches.

“Because we are the aspirational retailer we get first access and possibly exclusive access [to new launches],” said Peter Cowgill, the executive chairman. He said the company did have competition from chains with a smaller presence in the UK, such as Foot Locker, but that its much bigger potential rival Sports Direct “services a different part of the market”. Via theguardian.com 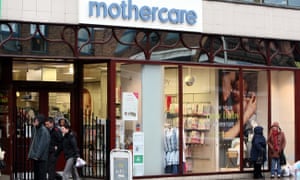 Shares in Mothercare have plunged after the baby goods chain reported that shoppers stayed away from its non-UK stores, particularly across the Middle East and China.

Mothercare, which has 170 stores in the UK and 1,310 overseas, said on Thursday that sales fell in all four international regions in the 11 weeks to 26 March. Sales were down by 9.7% measured at constant currencies and dropped by 10.8% in actual currencies.

In the Middle East, customers spent less because of the slump in oil prices, while China recorded weaker consumer confidence amid the country’s economic slowdown. Europe and Latin America were affected by adverse currency moves. Mothercare is in the middle of a turnaround programme that doubled overall half-year profits in January and halved its UK losses. The shares fell on Thursday by nearly 20% to 152.5p. Via theguardian.com

But is there scope for entrepreneurial businesses to fundamentally change the way that retail works? Chris Griffin, founder of UK-based startup Anatwine says that by adopting a technology-based process that integrates product procurement and order fulfillment, retailers working in the fashion sector can increase like-for-like sales by hundreds of percent. And with the opening of an office in New York and the appointment of former Boston Traders CEO Paul Rosengard as President, Griffin’s two year old company is aggressively targeting the North American market.

Anatwine is a retail technology company with its roots in the fashion industry. Griffin established a profile in the sector when he signed a deal with clothes retailer and manufacturer Superdry, which allowed him to sell the company’s clearance stock on eBay. From there he joined Superdry with a brief to improve the company’s e-commerce offering. “I raised e-commerce sales by 77 % in a month,” he says Via forbes.com

As part of its continued expansion, Amazon has acquired a warehouse based in Manchester.

The new fulfilment centre will open this autumn and create 1,000 new jobs over a three-year period. This extension of the internet giant’s workforce is part of its plan to create an additional 2,500 jobs this year, bringing its total employee count to 14,500.

The new positions will include engineers, computing staff, operations managers and human resources. In addition to the Manchester site, Amazon is also planning to open another centre in Coalville, Leicestershire, bringing its total UK estate to 12. Via retailgazette.co.uk

Nearly half of all British grocery customers shop online, while over 11% never visit brick-and-mortar stores. A recent survey by Mintel of 2,000 people, aged 16 and over, found that 48% of them had at some point done their supermarket shopping online, choosing either delivery or collection over the traditional supermarket shopping trip.

While 11% of Brits overall do so without visiting stores, it was mainly young adults that leaned towards electronic shopping, with 19% of 25 to 34 year olds stocking up solely in cyberspace.

Still, traditional shopping is not yet on the way out, as 24% of those surveyed not only said that they have never shopped online, but also that they have no intention to, rising to 38% when limiting results to those over 55. Via retailgazette.co.uk

In response to growing demand for its products from the male demographic, Boohoo has launched a website catering exclusively to menswear. The new website, boohooman.com, is geared towards male shoppers aged between 16 and 24, with weekly product drops across different ranges.

“The core of our business has always been to provide the season’s latest looks, whilst still delivering incredible value, but now we have the opportunity to tailor the offer and the content we serve up to the menswear customers, making their shopping experience more personalised and engaging,” said Boohoo Marketing Director Richard Clark.

The original Boohoo website describes itself as a menswear site, though male clothing has been available on it since 2013. The new website is one step among many that etailers have taken to personalise their platforms in order to better please customers. Via retailgazette.co.uk

There’s nothing like an M&S food advert. For Christmas 2006, a tantalising voice described a pudding filled with plump raisins and drenched in cognac, and in September last year the ‘Adventures in Spice’ TV ad featured red chillies bursting into fireworks and spices transforming into kaleidoscopic patterns.

Marks & Spencer food is sexy, so it’s no surprise that the British stalwart’s recent figures show sales in the food division grew 4%, helping group sales increase1.9% in the 13 weeks to 26 March.

As with 18 sets of 19 results over recent years food offset a decline in the general merchandise category, which fell 1.9%. Meanwhile, sales at M&S.com grew 8.2%. Via retailgazette.co.uk

Is Forever 21 scaling back on the UK?

Forever 21 will close its flagship Scottish store, at the loss of around 200 jobs. The retailer, one of the biggest in the US, has been in Scotland for under three years and the move comes amid a round of closures and downsizing from the Los Angeles-based business.

Forever 21 has already closed its Manchester store and, according to the Glasgow Evening Times, is expected to withdraw from a number of other UK locations.

Meanwhile, rival fast fashion chain H&M will takeover the unit. In the US, Forever 21 accounts for 10% of the country’s clothing market. Via retailgazette.co.uk

Generally, bricks-and-mortar stores sales Airsoft to slightly lower while eCommerce continues to be a bright spot along with a few niches such as sportswear. We’ll keep you current on retail  trends in the UK and around the world. Check stories in our Archives in categories from cashback, e-commerce and retail to mobile, financial payments and VC investments.