With all the negative news about retail results in the first quarter 2016, Nordstrom had less than impressive sales instore but had excellent results with its e-commerce properties in 2015. 2015 overall company sales were up only 2.7%. Bricks and mortar sales for 2015 decreased 1.1% for full-line stores and were down 1.0% for Nordstrom Rack. The real positives came with e-commerce sales which grew 15% at Nordstrom.com and an impressive 47% growth at Nordstromrack.com/HauteLook. Definitely a case where multichannel revenue helped maintain modest growth overall.

The Seattle Times reported Nordstrom’s Q1 2016 results dropped further across the board with profit of $46 million, down 64%, instore department store sales down 7.7% and Nordstrom Rack down 0.8%. E-commerce sales rose 3.1% for Nordstrom.com and 41.8% for Nordstromrack.com and HauteLook.

Adam Levine-Weinberg, writing in the Motley fool.com, said he still finds business fundamentals to like with Nordstrom. At Seeking Alpha, Josh Arnold is also optimistic about the company’s future. Nordstrom’s rebuilding strategies include cost-cutting, growing its off-price business (including online) and extending its successful loyalty program according to the Chicago Tribune. Co-President Blake Nordstrom said the company is halfway to its staff reduction goal and spoke about plans for growing the loyalty program at the company’s annual meeting.

Even though online sales may reach 30% by 2026, Co-President Erik Nordstrom said there is still a key role for bricks and mortar stores. it may be 115 years old, but Nordstrom is using Snapchat and other social media to extend its store experience to consumers said Digital Director Bryan Galipeau in eMarketer. Nordstrom’s December 2015 investment in online shoe retailer Shoes of Prey is part of a number of other tech/e-commerce investments including Trunk Club, HauteLook and Bonobos. Despite some criticism from analysts for straying from its core business, online sales represent 21% of total sales at Nordstrom according to Internet Retailer.

Nordstrom could not escape the woes bedeviling the apparel retail sector as the company reported first-quarter profit far below both last year’s level and Wall Street’s expectations.

The company Thursday said profit for the quarter was $46 million, down 64 percent from $128 million a year ago, while revenues were barely ahead of last year’s first quarter. Nordstrom attributed the profit plunge to lower-than-expected sales volume and higher markdowns.

A major source of the sales falloff was in Nordstrom’s pride and joy: its full-line brick-and-mortar stores. Sales at Nordstrom’s stores open at least a year dropped 7.7 percent compared with a year ago. Its off-price Nordstrom Rack stores held up better, with sales dropping just 0.8 percent. Via seattletimes.com

Why I’m Sticking With Nordstrom, Despite Terrible Q1 Earnings

Investors have dumped the stock, sending it down more than 20% in the past week. Nordstrom shares have now lost about half of their value since last summer.

However, Nordstrom’s underlying business is a lot healthier than it appears. As a result, I expect sales growth to accelerate again and earnings to rebound in dramatic fashion during the next few years. Here are three reasons why I remain confident in Nordstrom’s future. Via fool.com

You can certainly add Nordstrom (NYSE:JWN) to the list of retailers that have been absolutely decimated lately. The sector in general – apart from a few pockets of strength – has been crushed of late as consumers have pulled back spending on things like apparel in particular. For a company that makes its living on apparel like Nordstrom, that’s disastrous and the chart below shows the damage that has been done. But with shares off about half since peaking last year, is Nordstrom headed for continued disaster or is this perhaps an opportunity to buy?

As a note, I’ll be using some charts from Simply Wall St. to help build my case.

The apparel portion of retail has been a tough place to do business the past several months and JWN is certainly not immune. However, I think pessimism on the shares has been overdone despite the fact that Q1 earnings were absolutely horrendous. JWN even topped its bad Q1 with an enormous guidance cut. And that, my friends, is how you end up with a chart that looks like the one above. Via seekingalpha.com 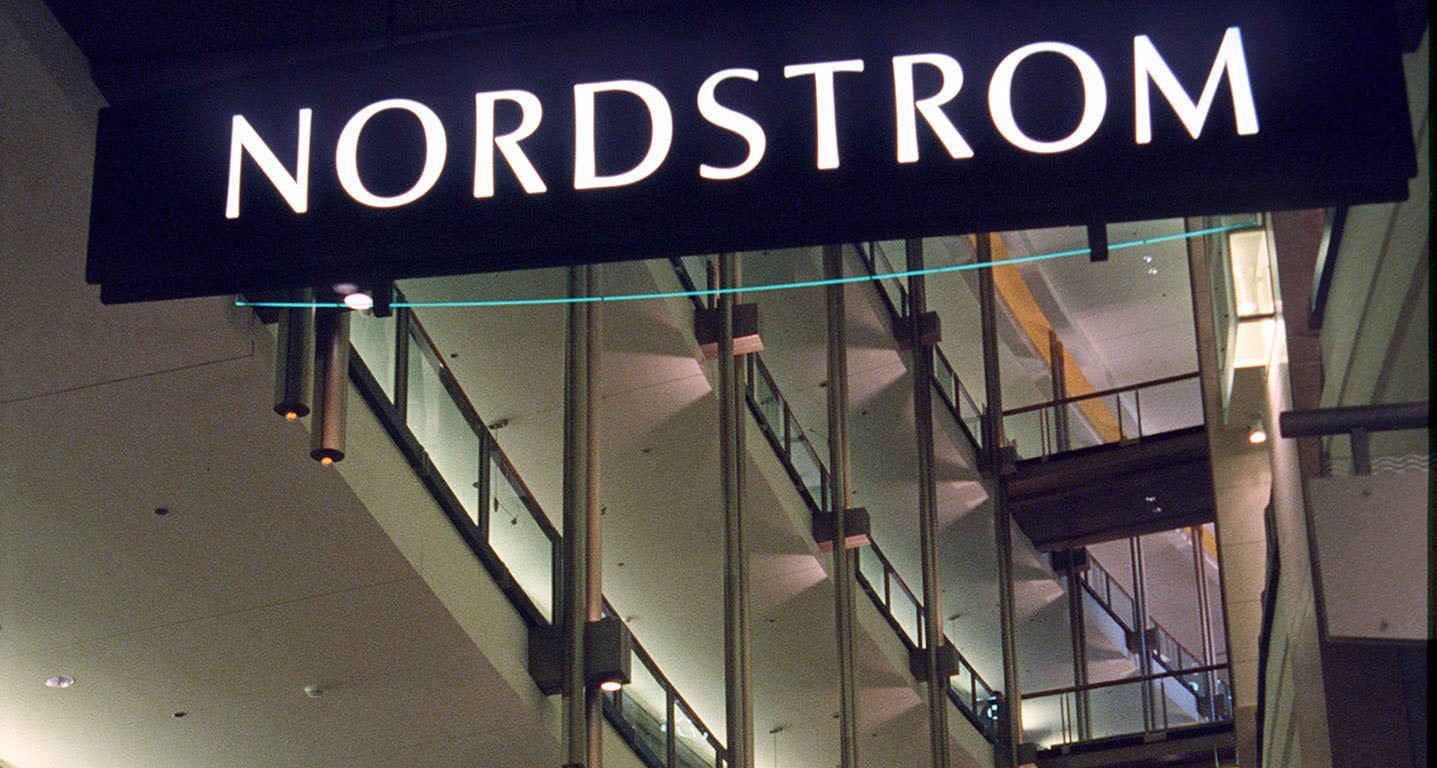 After a disappointing start to 2016, Nordstrom is growing its off-price business and trying to woo shoppers with a more inclusive loyalty program.

Nordstrom customers no longer need one of its store credit or debit cards to earn points redeemable for $20 “Nordstrom Notes” through its Nordstrom Rewards loyalty program, the company announced in a news release last week. Members with Nordstrom cards still earn those points faster and get exclusive perks including private shopping parties and early access to sales.

A more inclusive loyalty program is a smart strategy for a company that’s seeing much of its growth come from its off-price business, which tends to attract younger customers who are wary of store credit cards, said Melissa Fruend, partner at LoyaltyOne Consulting. Via chicagotribune.com

Nordstrom is halfway to its planned 400 corporate job cuts, the company said at its annual shareholders’ meeting Thursday morning.

It also launched an expanded rewards program Thursday that allows customers without a Nordstrom card to earn points toward rewards.

Those two moves — one designed to cut expenses and the other to get more customers to visit stores more often and to spend more — are among the steps Nordstrom is taking to try to bolster its bottom line after a bruising nine months. Via seattletimes.com

Even as more and more of its customers make purchases online, Nordstrom still sees value in having brick-and-mortar locations. That was the message from Nordstrom executives at the company’s annual shareholders meeting in Seattle on Thursday.

It’s been a tough past few months for Nordstrom, which saw its stock drop more than 17 percent last week after reporting its quarterly earnings. Lower-than-expected sales for Nordstrom point to a larger trend of retailers seeing slower brick-and-mortar mall traffic and competition from other e-commerce companies like Amazon.

About 20 percent of Nordstrom’s business today comes from purchases made online. Asked about the proportion of online sales versus offline over the next decade, Erik Nordstrom, the company’s co-president, said that he wouldn’t be surprised if that number reached 30 percent by 2026. Via geekwire.com

Snapchat is still considered a newcomer by many brands, and few have added it to their social marketing arsenal. Department store retailer Nordstrom, however, has been using Snapchat to reach specific segments of its diverse customer base since March 2015, and directed its most recent campaign at college students. Bryan Galipeau, the retailer’s director of social media and display, spoke to eMarketer’s Maria Minsker about what makes Snapchat powerful.

eMarketer: Why is social media important to Nordstrom’s marketing strategy?

Bryan Galipeau: Each social media platform is used differently by our customers, but our goal for all of them is to bridge the gap between digital experiences and the physical world. We are a 115-year-old retailer with a longstanding brick-and-mortar presence in 121 stores. A key part of our company is the experience of Nordstrom. Through social, we aim to bring experiences that are happening in our stores to life. Via emarketer.com

The luxury department store chain is part of a syndicate of investors that has pumped in $15.5 million in a new financing round in Shoes of Prey, the venture capital-backed retailer said on Monday.

Australia-based Shoes of Prey sells customizable women’s shoes in a range of materials and designs online, including Nordstrom.com and in select stores, including six Nordstrom stores. The round Nordstrom took part in was Shoes of Prey’s largest so far and was led by BlueSky Venture Capital. Shoes of Prey has so far raised $24.6 million, including an earlier round, and said customers have designed 5 million pairs of shoes since it launched in 2009.

Nordstrom-as-venture-capitalist may seem an odd concept at first blush. But the retailer has emerged as something of a player in retail tech M&A in recent years, certainly much more than its peers. (Macy’s M 0.00% is getting in on the action, having bought Blue Mercury for $210 million earlier this year.)

Fueling that growth was a sharp spike in web business for Nordstrom Rack and HauteLook, both of which make up the retail chain’s off-price business. Nordstrom reported combined online sales for those brands of $166 million, up 41.9% from $117 million last year. Nordstrom posted a 4.6% year-over-year comparable sales gain in its off-price business including in-store and online, a figure that isn’t going unnoticed by senior management Via internetretailer.com

More retail news ahead this week as well as a profile and update on Alibaba. As always, if you’d like your free, weekday morning Cashback Industry News in your inbox, just sign up at the top of this page. Never any spam, just news you can use.