Coupons have been a mainstay of marketing forever. In the digital world, are they still effective? Today, we look at what’s happening and what’s trending in traditional and digital coupons. eMarketer estimates 40.5% of US companies with more than a hundred employees will use mobile coupons for marketing purposes growing another 7.5% by 2017. 85% of Americans use coupons and 63% use newspaper, email or other print coupons according to CreditCards.com. The Motley Fool newsletter says Groupon, Amazon’s Living Social and RetailMeNot  are finding growing the coupon business a challenge. SIM Partners reports 92% of U.S. consumers use coupons and redeemed 66 million digital coupons in 2013—up 141% from the previous year.

Who knew shoppers using coupons are more satisfied with supermarkets even though more are paying full price these days according to Retail Feedback Group. Millennials are frugal but willing to share personal information for savings says research report by Coupons.com and Bovitz, Inc. This just in, Forrester found digital coupon users in France are more keen on the promotions than Brits. According to PayPal Canada, “commuter commerce” is a growing phenomena as consumers look for deals, use coupons and purchase while commuting. 79% of consumers will share data for cashback and 77% will share for coupons says a study from Center on Global Brand Leadership at Columbia Business School and Aimia. Statistica says mobile coupon usage is up 70% from three years ago. Mobile matters!

While mobile advertising can be an effective way for companies to reach consumers, being able to actually link a mobile ad to an in-store purchase is important. An October 2015 survey found that mobile coupons can help. According to research by Marchex and Digiday, almost two-thirds of US marketers said mobile coupons were the most effective method for attributing in-store purchases to mobile ads.

Indeed, mobile coupons are valuable. In 2015, 40.5% of US companies with more than a hundred employees will use mobile coupons for marketing purposes, eMarketer estimates. By 2017, that number will grow by 7.5 percentage points. Via emarketer.com 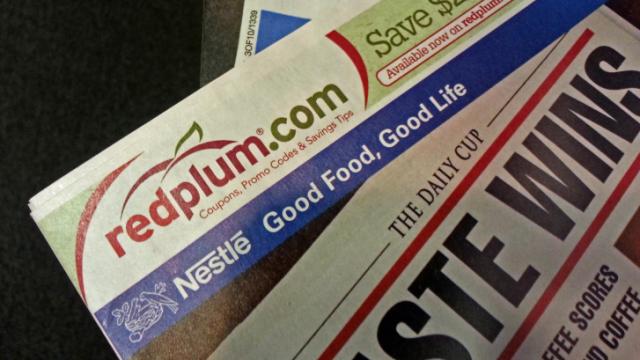 Despite all the technology available to consumers today, Americans still prefer paper coupons, according to a new CreditCards.com report.

Here are the findings:
— 63% of U.S. credit/debit cardholders who use coupons say they most frequently present coupons from newspapers, mailings and other paper products.
— Entering a discount code online is a distant second (17%), followed by presenting a coupon or discount code on one’s phone (15%).
— 85% of Americans use coupons (24% often, 29% sometimes and 32% occasionally).
— Paper coupon usage decreases with income and increases with age, but even 18-24 year-olds are using paper coupons about twice as much as any other method. Via wral.com

Groupon isn’t the only company facing big difficulties in the discount-coupon business. Even the almighty Amazon (NASDAQ:AMZN), one of the most powerful and successful companies in the online world, is having a hard time in the sector. Amazon has invested nearly $200 million in LivingSocial, one of Groupon’s closest competitors, yet Amazon’s annual report for 2014 shows that LivingSocial suffered a 23.5% revenue decline during the year, and the company is also losing money at the operating level.

Things don’t seem to be getting any better for LivingSocial either. The company recently announced that it will be firing 20% of its workforce and changing its business model, moving away from daily deals and transforming itself into a marketplace for experiences. Furthermore, Amazon recently announced that it’s closing Amazon Local, another business competing directly against Groupon, on Dec. 18.

RetailMeNot (NASDAQ:SALE) is another company reporting major problems in the online coupons business. Investors reacted with optimism to RetailMeNot’s earnings report for the third quarter of 2015, but only because the numbers were better than feared. That doesn’t mean the key variables are moving in the right direction. Far from it: RetailMeNot is expecting a 14% revenue decline during the fourth quarter of 2015, while total sales for full-yearl 2015 are forecast to fall by 9% annually. Via fool.com

Captivating the Consumer with Digital Coupons

Digital coupons are making it possible to share product offerings with customers precisely when and where it matters most, and because the mobile environment is ever-present, it’s there at the moment of inspiration—when customers are out at the pump and can be brought into the convenience store. Digital coupons have existed in one form or another for the last couple of decades, but according to SIM Partners, the category has really taken off and is now driving increased in-store conversions. In a recent article they reported, “Not only do 92% of U.S. consumers use coupons, but consumers also redeemed 66 million digital coupons in 2013—up 141% from the previous year.”

According to a GasBuddy survey conducted in April 2015, 81% of its members would be influenced to try a product if a digital coupon was offered within their app. Furthermore, 76% of members polled said the offering of digital coupons would affect their decision on where they filled up on gas (if the price of gas was the same), thus increasing revenue and loyalty for the participating convenience stores. Via CSPnet

So the research findings support the fact that this reduction in use of various vehicles isn’t just an issue of shoppers moving from print to digital given the declines in both. As we gain distance from the recession of several years ago, the visibility of the economic downturn begins to fade and some shoppers are in a better position, resulting in a reduced dependency on money-saving measures and more focus on convenience and speed, especially among higher income shoppers.

But at the same time, the overall number of shoppers using some form of money-saving measures has only declined by two percent so these vehicles are absolutely still relevant. Perhaps most importantly, shoppers who use the circular, coupons and sales promotions are more satisfied (with an average score of 4.52 versus 4.44 overall) and more likely to recommend the supermarket. Via ProgressiveGrocer

Millennials want personalized coupons and prefer to shop in stores

The generation buried in student debt expects savings on-demand across all digital channels, is happy to share personal information in order to get more relevant savings offers, and prefers browsing store shelves to shopping online. These are just some of the findings from the “Uncovering Truths Of Millennial Spending,” a new report by Coupons.com Incorporated (NYSE: COUP) and research firm Bovitz, Inc. The report, which surveyed 2,000 people in Millennial, Gen X and Boomer generations, also explores several topics related to money management, including financial outlook and budgeting.

“Millennials are educated and realistic about their finances, ” said Seth Marlatt, Vice President of Analytics and Research at Coupons.com. “Almost 70% closely monitor their budgets. Millennials embrace the idea of frugality, considering themselves smart shoppers, and take pride in educating themselves how to get the best deals when they want them.” That often means heading to the store instead of online. While Millennials often use technology to conduct research before shopping, when it comes to buying groceries, 81% said they prefer shopping in store. More than 70% said they prefer in store for household goods, beauty and personal care items. Via prnewswire.com

Digital coupons can make the difference between a conversion and an abandoned cart for more than half of users in France, according to March 2015 research. Forrester Consulting, commissioned by RetailMeNot, found that digital coupon users in France were more keen on the promotions than their counterparts in the UK.

A new benchmark research from PayPal Canada and Ipsos unveils that, Commuter Commerce, a new shopping behavior where people shop from their mobile phones while on public transport, is a new retail trend in Canada. Today, 14% of mobile connected commuters shop while in transit, 76% would consider purchasing a broad-range of products if mobile shopping options were easily accessible. Those engaged in commuter commerce spend an average of $529 a month per person buying a variety of items from movie tickets to clothing, shoes and accessories.

With 4G LTE cellphone connectivity on streetcars, buses and above ground trains and more Wi-Fi options on public transport PayPal Canada forecasts that Commuter Commerce is poised for growth over the 2015 year-end holiday season and beyond. Via streetwisereport.com

Based on the poll’s responses, the most trusted financial services brands in the U.S. are Chase, Bank of America and Wells Fargo. For airlines, it is Southwest, Delta and United/American. AT&T, Verizon and T-Mobile are the most-trusted telecoms, and Walmart, Kroger and Target/Costco are most-often picked in the retail category. Facebook, Google, Yahoo are the most-trusted web brands, and Amazon, Walmart, and Ebay are most trusted for web commerce.

Is the future of coupons mobile?

Mobile coupon audiences are growing. According to a survey by Statistica, adult mobile coupon users are projected to reach 104 million in 2016, a 70% increase from just three years ago. In addition, 90% of all mobile users will look for a coupon next year.

In fact, 70% of all consumers want a coupon for products they buy most, and they want these to come in the form of personalised coupons sent to them by the retailers they buy from. Via inma.org

Speaking of coupons, you can still save 25% on the 2015 Cashback Industry Report, the essential guide to the global industry, best practices, industry leaders, company profiles, VC funding, future trends and much more.