The Chinese economy is still soft but you wouldn’t know it from the rapid growth of online shopping. This mid year overview will get you up-to-date on the latest e-commerce news from China. eMarketer reports China will become the largest e-commerce market in the world by the end of 2016, reaching $899.09 billion or 47% of all online retail sales in the world. Online sales will hit $2.416 trillion in 2020 and spending via mobile will account for 55.5% of all ecommerce sales and reach 68% by 2020.

According to an EJI Insight report, e-commerce is driving China’s economic growth, growing to 12.9% of retail sales in 2015. The average user of Alibaba’s Taobao app will soon spend up to $1500 per year shopping online. More than 75% of Chinese e-commerce is transacted through Alibaba, which includes Tmall and sister site Taobao (Alibaba’s consumer-to–consumer sales site). Although Amazon could not compete well with Alibaba and JD.com in the past in China, it has now seen more than 10 million international orders from Chinese consumers and expects strong growth to continue.

With the growth of e-commerce, luxury retailers now see opportunities in online sales, according to Winston Chesterfield, Wealth-X Research Director. As an example, with sales down 18% in the first half of 2016, Prada plans to concentrate on growing its online business in China and across SE Asia. Tencent Holdings now owns 21.25% of the country’s second-ranked online retailer JD.com.

Investors including Carlyle Group LP, Canada Pension Plan Investment Board (CPPIB) and Warburg Pincus have invested more than $12 billion in the underdeveloped storage market in China. While the West uses Visa, MasterCard and PayPal, Chinese consumers use UnionPay, AliPay and WeChat Pay, making for an interesting financial payments ecosystem and a big contrast from western countries.

In 2016, China will surpass the US to become the world’s largest retail market with total sales of $4.886 trillion, compared with $4.823 trillion in the US, according to eMarketer’s latest worldwide retail forecast.

With China having one of the most developed ecommerce markets in the world, eMarketer expects purchases made digitally will represent a globe-topping 18.4% of the country’s total retail sales this year. China will continue to see massive gains in retail ecommerce over the next few years, with sales topping $2.416 trillion in 2020. Spending via mobile is also booming and this year will account for 55.5% of all ecommerce sales and reach 68% by 2020. Via emarketer.com

Building on heavy investments in public infrastructure such as ports, airports, roads, rail, and telecommunications, the internet is now expanding rapidly the range of choices available to Chinese consumers while lowering costs and accelerating delivery.

China has now overtaken the United States to build the world’s largest online retail market. With a growth rate of about 33 percent, it is also the fastest-growing such market Via ejinsight.com

While Facebook might be the undisputed leader in social media, Alibaba is adding several social features to its marketplace mobile app “Taobao” to keep users hooked. In its Q1 2017 results call, Alibaba’s Chief Executive Daniel Zhang stated that social features are extending the visiting frequency of users, to the extent that Taobao is more like a social commerce app rather than a market place. As per our estimates, average active buyers and average spend per active buyer are two key metrics which drive the valuation of Alibaba’s most valuable segment, in our estimation, the China Retail Online Marketing segment. Taobao’s social features are attracting more users to the app and increasing their engagement, which is leading to higher user spend on the app. This strategy will drive revenues for Alibaba over the longer term, allowing the company to retain its competitive advantage.

Social Shopping Enticing Younger Customers To Spend More
According to a recent Bloomberg Report, Alibaba’s efforts to create social features on its e-commerce app are paying off. The company encourages users to join special interest groups, based on their buying patterns as analysed by the company through millions of data points. Within these groups, users can be part of discussions. Users can share product information and recommendations with each other. They can also participate in live streams with each other or test and share tips. Experts believe that these features are exciting for younger consumers who want to create a social experience around their shopping and lead to higher number of visits and more time spent on the app every day. According to Alibaba, users launch the Taobao app an average of seven times every day. This is a big number for any app. The company has been able to provide Chinese shoppers their preferred offline social buying experience in an online market place and this keeps them engaged and makes them return to Alibaba’s e commerce app multiple times every day.

According to our estimates, average spend per active buyer on Alibaba’s China retail platform will increase from around $1,200 in 2016 to more than $1,500 by the end of our forecast period. Via forbes.com

So what makes China the outlier?

The first thing to understand about Chinese e-commerce is its unique degree of centralization. Unlike in the U.S., where all major retailers and many of the minor ones operate their e-commerce sites independently, in China most retailers big and small operate as storefronts on Alibaba’s Tmall.com (business-to-consumer site). In fact, more than 75 percent of Chinese e-commerce is transacted through Alibaba, which includes Tmall and sister site Taobao (Alibaba’s consumer-to–consumer sales site). Contrast this with Amazon, which “only” held an estimated 26 percent share of the U.S. e-commerce market in 2015 according to MacQuarie Research.

Alibaba’s dominance means that shopping with a new e-retailer is just as easy as buying from an old favorite because consumers are using a single Tmall account regardless of the store they are buying from.

It’s a massive difference from the U.S. and other major markets where shopping at ten different e-commerce sites means having ten different accounts with different log-ins and passwords along with completely different checkout procedures to learn. In China, it’s one account and the same checkout UI for shopping at thousands of different retailers. Via thedrum.com

China’s luxury consumers are moving beyond bricks and mortar and going online for their next python-skin handbag fix, and high-end fashion houses and retailers will have to follow them, analysts warn.

“Traditionally so far (luxury firms) have stayed away from e-commerce because they’ve been worried about diluting their brands – they’ve been wanting to have bricks and mortar, to having a very traditional luxury image in China.”

Not only do physical shops act as points of sale, but they’ve become “significant marketing tools for luxury” by having the power to “bring (a) brand to life” through design, service and new technologies, Euromonitor International’s Head of Retailing Research, Michelle Grant told CNBC via email. Via cnbc.com

Amazon Inc has got 10 million cross-border orders from Chinese consumers already and plans to expand in the cross-border e-commerce market through global networks and resources and a new luxury store luxury store in China, joining the e-commerce battlefield in the domestic market.

Amazon is one of a few US-based Internet firms to get progress in China. But it still faces challenges with strong local rivals like Alibaba, JD.com and NetEase, which all expand into the cross-board business. “Global supply and logistic systems are unique advantages of Amazon. It aims to bridge connection between qualified goods and Chinese consumers,” said Zhang Wenyi, president of Amazon China.

Zhang’s confidence came from the fact that Amazon’s revenue of overseas goods bought by Chinese consumers surged four times in the first half of 2016. Consumers can get the products, ranging from German milk powders, Japanese cosmetics to US apparel, within two or three days after ordering them. Via shanghaidaily.com

Though Tencent is now the largest shareholder, Liu still holds 80.9% of voting rights. Since Tencent’s voting stake is likely to remain about 5%, major changes in management seem unlikely.

The two companies already cooperate in online retail and likely will fortify their relationship to expand their online businesses. Tencent had become a major JD.com shareholder, with a 15% stake, after announcing plans in March 2014 to invest $200 million in the company. Via asia.nikkei.com

The Italian-headquartered, Hong Kong-listed luxury brand says its Asia-Pacific sales slumped 18 per cent on a constant currency basis in the first half of this year.

“The negative economic backdrop continued to impact performance in both Hong Kong and Macau, but signs of improvement have been visible since July across Greater China,” the company noted in its results.

And after a period of consistent growth since 2010, sales in Japan fell 9 per cent, mainly due to lower tourist flows from China caused by a less favourable exchange rate. CEO Patrizio Bertelli says the company will now make China, Hong Kong and Singapore its priorities in roll out its new eCommerce platform, which is expected to be global within to years. Via insideretail.asia 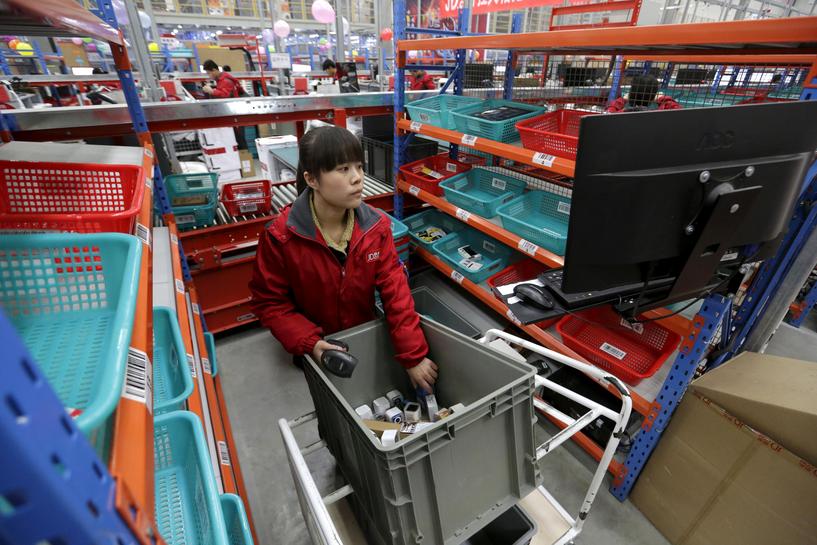 When U.S. private equity heavyweight Warburg Pincus [WP.UL] started looking at China’s logistics sector in late 2009, there were more modern warehouses in Boston than in the whole of the world’s most populous country.

But as Chinese consumers embarked on an online shopping spree, demand has soared from appliance makers, express delivery firms and e-commerce companies such as Alibaba Group Holding Ltd and JD.com Inc, far outpacing supply and prompting a parallel binge in investment in warehouses and logistics businesses.

E-Commerce as a Case Study: How to Handle Payments in China | Finance Magnates

In the latest edition of the Finance Magnates Quarterly Industry Report, readers can find a thorough case study that x-rays the Chinese payments industry. At a time when the Western world uses mainly Visa, MasterCard and PayPal solutions, Asians are highly satisfied with services provided by UnionPay, AliPay and also WeChat Pay.

Andy Cheung, COO of WeCollect, says: “China UnionPay emerged from the offline payment space and has recently developed products for the online world. On the other hand, other major Chinese payment solutions such as Alipay and WeChat Pay evolved from the online world and has recently tried to enter the offline payment space. The next battleground will be the O2O sector where the offline and online worlds come together. As payments in China becomes more fintech focused, the major challenge of China UnionPay and banks is to leapfrog their old legacy systems in favor of new innovation and technologies.”

The first legal guidelines regarding the domestic third-party payment providers in China emerged in 2010. Very quickly however, the dynamic growth of the e-commerce sector and heightened user demand forced the introduction of additional regulation and licensing. These were issued in 2013 by the State Administration of Foreign Exchange (SAFE).

It has to be noted that the Chinese market has quite specific characteristics, and unlike most developed economics, it does not provide free cross border money transfers, adjusting the conversion of foreign currency to RMB and vice versa. via Finance Magnates

India e-commerce on the horizon

Our Friday post will feature a roundup of Indian e-commerce and it promises to be a good one. As Indian consumers get more comfortable buying online, competition is heating up among the biggest players and venture capital is harder to get, creating the potential for mergers, acquisitions and some closures. We’ll have all the news you can use, so stay tuned.